Spinal Decompression Research Studies
How likely are you to be deficient in vitamins or minerals?
October 5, 2018 By: admin In: Uncategorized Comments Off on Cold Laser Research 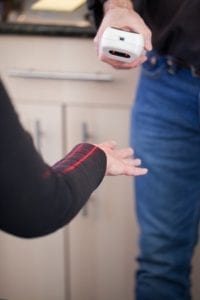 CONCLUSION:  A study was performed (randomized, double-blind, and placebo-controlled) on 90 people with chronic neck pain to determine the efficacy of an 830 nm laser, 300 mW, low-level laser therapy. They noticed that cold laser (LLLT) was effective in providing pain relief for chronic neck pain sufferers over a period of three months. For more information and the full study go to – Pain. 2006 Sep;124(1-2):201-10. Epub 2006 Jun 27. [PMID: 16806710]

Efficacy of low power laser therapy and exercise on pain and functions in chronic low back pain.

The study was aimed to find out if low power laser therapy (GaAs laser) was useful for a therapy on chronic low back pain.

CONCLUSION: In the treatment of chronic low back pain, low power laser therapy was an effective method in reducing pain and functional disability.

Efficacy of low-level laser therapy in the management of neck pain: a systematic review and meta-analysis of randomised placebo or active-treatment controlled trials

Lancet. 2009 Dec 5;374(9705):1897-908. Epub 2009 Nov 13. [PMID: 19913903]
CONCLUSION: The authors identified 16 randomized controlled trials that included a total of 820 patients. They did a systematic review and meta-analysis of the trials to determine the efficacy of LLLT in neck pain.  They showed that LLLT reduces pain immediately after treatment in acute neck pain and up to 22 weeks after completion of treatment in patients with chronic neck pain.

CONCLUSION:  This study was performed on >200 patients that were suffering with low back and radicular pain, skeletomuscular ailments, headaches, facial pain, myogenic neck pain, shoulder and arm pain, epicondylitis, tenosynovitis, and achilles tendonitis.  They used various LLLT methods which included; infrared 820-830 nm continuous wave, 632.8 nm visible red, and 904 nm pulsed emission on “trigger points” and focal pain points due to ischemic conditions.  They observed spontaneous or induced pain decreased or even disappeared by movement, mobility was restored, rigidity decreased, and microcirculation improved along with improvement of oxygen supply to hypoxic cells in the treated areas and removal of collected waste products. Results measured according to VAS/VRS/PTM: in acute pain, diminished >70%; in chronic pain >60%. They also concluded that LLLT (Cold Laser) may be used by its self or as an added supplement to other therapeutic procedures for pain treatment.  No negative effects were noted with LLLT and the use of analgesic drugs could be reduced or completely excluded.

Injured cells and tissues have greater affinity for LLLT than healthy cells and tissues. LLLT in the treatment of inflammation, pain and healing is a highly integrated process, but the author separates those processes categorically for identification.

Richard Martin, BS, CLT is a photobiologist specializing in laser therapy and holds the position of Director of Science at MicroLightLaser, a subsidiary of Innovative Medical Group Corporation in Santa Monica,CA. He has taught laser physics and photodynamics for eight years. He has served as manager for several biomedical design and service facilities and participated as lead researcher for biomedical devices involved in emergency cardiac care, warmed intravenous fluid therapy and laser therapy. Richard has participated in medical clinical trials for 15 years as a clinical trial analyst and contributing clinician.

They indentified 11 out of 88 randomized controlled trials that included 565 patients with chronic joint disorders that were using an appropriate and acceptable method of treatment procedures. They also added that there should be caution with treatment procedures and trial design for interpretation of the results.  CONCLUSION: Cold Laser (LLLT) gave significant reduction of pain and improvement in health status in chronic joint disorders.

A forty (40) year old woman presented at the Abe Orthopaedic Clinic suffering with pain in the low back and left hip and leg for 2 years.  MRI showed a ruptured disc in the last lumbar disc (L5-S1).  Her condition failed to respond with convention treatment methods including; NSAIDS (Non-steroidal anti-inflammatory drugs), lumbar/pelvic traction, dural block anaesthitic injections.  Cold Laser (LLLT), GaA1A diode laser with 830 nm wavelength, 60 mW, was used on the patient as an outpatient therapy.  CONCLUSION: The patient’s condition dramatically improved which was demonstrated by motility exercises.  A follow-up MRI confirmed the improvement with significant results showing a normal condition of the previous lumbar disc herniation at L5-S1.

The authors noted, under “Background Data”, that the use of LLLT (cold laser) for chronic pain attenuation has been reported in international literature for over 20 years.

The study was assessing the long term effects of Cold Laser (LLLT) through retrospective surveys using questionnaires.  1,087 patients were treated with LLLT from April 1992 to August 1995 at the Shiroto Clinic.

662 patients (397 females, 265 males) replied to the questionnaires that were sent to September and October 1996.  The treatment method consisted of Cold Laser (LLLT) diode laser system using 830 nm wavelength, continuous wave 60 mW, (which they noted was the most effective wavelength).

The total efficiency rating immediately after treatment was 47% in women, and 46.8% in men, at the time of the survey the rating soared to 76.8% in women, and 73.3% in men, which was considered good – excellent.  Additional factors were also positive including; physical energy, well-being, general fatigue, emotional stability, and mental vigor.  CONCLUSION: Cold Laser (LLLT infarred diode), is considered effective, safe, and side-effect free, therefore making the treatment an ideal adjunctive therapeutic modality for intractable chronic pain and other pain.

Photomed Laser Surg. 2008 Apr;26(2):99-105.
The author noted in background data that the use of Low Level Laser energy has been recommended for the management of a variety of musculoskeletal disorders.

CONCLUSION:  Cold Laser (LLLT) treatment was more effective in reducing pain and disability scores than a placebo at the end of the treatment period and at the follow-up period.

The effect of low-level laser in knee osteoarthritis: a double-blind, randomized, placebo-controlled trial

CONCLUSION:  This was a study to examine how LLLT (Cold Laser) 830 nm wavelength, continuous, power 50 mW, with 6 J/per point skin contact, had an pain relieving effect and microcirculatory changes to osteoarthritis in knee pain sufferers.  There was a placebo controlled group that was treated with the same appearance laser.  Both groups were examined at two weeks and two months after cold laser (LLLT) therapy. Thermography was performed using a AGA infrared camera and checked, circumference, joint flexion, pressure sensitivity, and the visual analogue scale was recorded.

RESULTS: Significant improvement in the treated group, with Cold Laser; was found in pain (before treatment [BT]: 5.75; 2 mo after treatment : 1.18); circumference (BT: 40.45; AT: 39.86); pressure sensitivity (BT: 2.33; AT: 0.77); and flexion (BT: 105.83; AT: 122.94). In the placebo group, changes in pain and joint flexion were not significant. Thermographic measurements showed at least a 0.5 degrees C increase in temperature—and therefore an improvement in circulation compared to the initial values. Changes did not occur in the placebo group. The results showed that Cold Laser (LLLT) reduces pain in Osteoarthritis in the Knee and improved microcirculation in the treatment area.

This study was performed to see if Cold Laser (LLLT) can reduce the pain from tendinopathy in randomized placebo controlled trials.  The authors ended up using 13 trials out of 78 studied that met their criteria on treatment procedure and trial design. They concluded that Low Level Laser Therapy does reduce pain in chronic and subacute tendinopathy when a specific does, location, and valid treatment was performed.  For more information go to Physical Therapy Reviews, 2001; 6:91-99.

CONCLUSION: This was a study to investigate the efficacy of an infrared GaAlAs laser, 830 nm wavelength, on post-surgical scarring process after inguinal hernia surgery.  They concluded that 830nm LLLT applied after inguinal hernia surgery was efficient is preventing keloids (excessive growth of scar tissue) from forming.  In addition, cold laser (LLLT) resulted in better scar appearance and quality six months post surgery. For the full study go to –Photomed Laser Surg. 2009 Oct 12. [PMID: 19821701]