How likely are you to be deficient in vitamins or minerals?

Cold Laser Research
Using Amphetamines May Increase Risk of Parkinson’s Disease
October 10, 2018 By: admin In: Uncategorized Comments Off on How likely are you to be deficient in vitamins or minerals?

How likely are you to be deficient in vitamins or minerals? 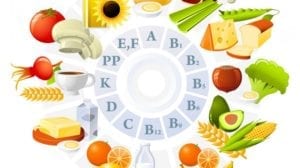 Based on the latest data from the Centers for Disease Control and Prevention (CDC) in 2012, about 10% or less of the general population had nutrition deficiencies for selected vitamin and minerals. The rates of deficiency are shown below along with some notable differences by age, gender, and race/ethnicity:

Vitamin D: 8.1% (with deficiency defined as serum 25-hydroxyvitamin D level less than 12 ng/mL). An additional 24% were at-risk for inadequacy (level of 12 ng/mL to to 20 ng/mL). Non-Hispanic black (31%) and Mexican American (12%) people were more likely to be deficient than non-Hispanic white people (3%).

Folate: Less than 1%. Deficiency has decreased since mandatory folic acid fortification of enriched cereal grain products in 1998, raising levels by about 50%.

If you have concerns about your nutritional status call us at 704-837-2420 or click the link below to arrange a no-charge consult with one of our doctors.