Are Plastic Bottles Causing Low Testosterone in Men and Women? 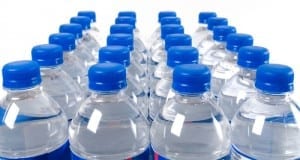 Plastic water bottles have been linked to low testosterone in males and low libido in both sexes. Today everyone has heard about low testosterone that is in epidemic proportions. This has made an explosive market for prescribed testosterone.

Research shows we have ten thousand times the level of phthalates we did just a decade ago. We get phthalates from many sources, including plastic water bottles.  These phthalates are decreasing blood testosterone in both sexes and at all ages.

We need to understand that environmental exposures and accumulations are not just lead, mercury, other heavy metals and the halides, but we are getting poisoned with endocrine disruptors in air, food and water.    Mothers are downloading their toxins into the baby from conception clear up to delivery. If nursing, the toxins are disseminated in the breast milk.  If the baby is on formula, it is possible for the baby to be exposed to the phthalates from the containers that the formula comes in.

It is a constant vigil to detoxify and minimize exposure to inorganic toxins like heavy metals and accumulations of toxic halides etc.  We have a whole new and severe problem with pesticides, dioxins, PBDE, PCB, Bisphenyl A and Phthalates.   Nutritional Detox, Foot Baths, Oral Chelation are all important and will need to become an everyday part of our lives to survive.  Organic toxins are also carcinogens and neurotoxins.  Yet, the public does not have the facts and testing for these toxins is usually not covered by insurance.  The tests are expensive, so most people settle for getting some treatment with hormones, which can be a contributor to their overall problem.

BELOW IS A REPRINT WITH THE RESEARCH WE HAVE BEEN CITING.

Increased urinary levels of endocrine-disrupting phthalates, found in flexible plastic and some personal-care products are associated with significant declines in testosterone levels not just in men, but in women and children as well, according to research published onlinehttp://press.endocrine.org/doi/abs/10.1210/jc.2014-2555 August 14 in the Journal of Clinical Endocrinology & Metabolism.

“We found associations between markers of phthalate exposure and testosterone levels among multiple age groups and in both sexes, including children – 6- to 12-year-old boys and girls, and girls ages 12 to 20,” lead author John D. Meeker, ScD, CIH, told Medscape Medical News.

The findings add to mounting evidence on reproductive risks linked to exposure to the endocrine-disrupting chemicals; however, many questions have remained regarding which chemicals are disruptive and who is most at risk. Dr. Meeker admits that while their findings expand the body of research in this field, the clinical implications remain unclear.

Asked to comment, Andrea C. Gore, PhD, the Gustavus & Louise Pfeiffer Professor of pharmacology and toxicology at the University of Texas at Austin, said this new work “really has taken the research up a step in terms of drawing stronger conclusions.” This is primarily because of the study’s relatively large sample size and its use of a more accurate methodology than is typically used, she told Medscape Medical News.

First Work in a Large and General Population

While previous studies have identified phthalates, particularly di-2-ethylhexyl phthalate (DEHP), to be antiandrogenic in rats and associated with decreased testosterone levels, most studies looking at their effect on testosterone have been small or involved unique subpopulations.

In seeking to investigate the relationship in a larger, more general population, Dr. Meeker and colleagues evaluated new data on 13 urinary phthalate metabolites and serum testosterone levels in 2208 participants in the National Health and Nutrition Examination Survey (NHANES) in 2011-2012.

The study is nevertheless highly valuable in improving the understanding of endocrine-disrupting chemicals, said Dr. Gore.

“Most research on the effects of endocrine-disruptive chemicals on humans have relied on other types of hormone measures, and there have not been many that have measured it the way they did here, with isotope dilution-liquid chromatography tandem mass spectrometry,” she told Medscape Medical News.

The more accurate assessment is critical because some hormone assays either grossly under- or overestimate hormone levels, especially when looking at the kinds of very low levels that are typical seen in women, Dr. Gore explained.

“Because of the low levels, if you don’t use a very sensitive and well-validated method for measuring the hormones, you will really not get reliable data.”

As reported by http://www.medscape.com/viewarticle/766695 Medscape Medical News, the Endocrine Society published recommendations http://press.endocrine.org/doi/abs/10.1210/en.2012-1422 in 2012 to better define and improve screening of endocrine disruptors, and the UN’s Environment Programme and the World Health Organization followed suit with a global assessment of the chemicals http://www.who.int/ipcs/publications/new_issues/endocrine_disruptors/en/.

The authors and Dr. Gore have reported no relevant financial relationships.

One Response to Are Plastic Bottles Causing Low Testosterone in Men and Women?