Does the US Really have the Best Healthcare?

Does the US really have the best healthcare in the world?  I don’t think so and neither do most agencies that keep track of the statistics.  (http://time.com/2888403/u-s-health-care-ranked-worst-in-the-developed-world/)

I recently travelled to England and France and noticed some very interesting differences.  In London, I passed by the Royal homeopathic hospital.  When was the last time you saw a homeopathic hospital in the US? Homeopathy was killed in the US by the AMA a hundred years ago.  I walked into pharmacies in both countries and found many of the alternative therapies that I use in my practice right there on the shelves including nutritional supplements, homeopathics, herbal remedies and aromatherapy.  As an alternative practitioner, here I am relegated to  being a second class citizen and considered by many to be a quack.  In Europe, my practice would be considered mainstream. 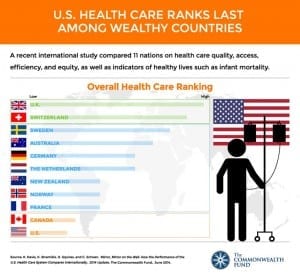 It would be wrong to draw the conclusion that making alternative treatments mainstream across the board would improve the health of our country’s population as well as decrease costs, but one has to wonder.  With so much money spent and the death and complication rates so high from our medical system, we must look at other countries and how they manage better than us.  The United States medical system turns it’s back on treatments, therapies and procedures that are not pharmaceutical or surgery based.  Other countries that have embraced alternatives are doing better for less cost.

2 Responses to Does the US Really have the Best Healthcare?